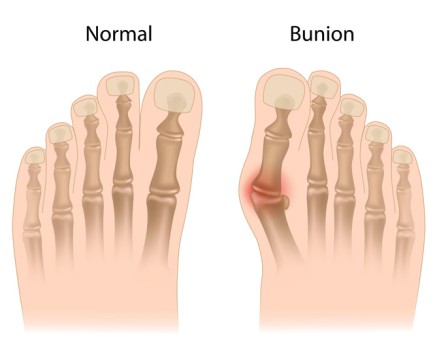 What is Bunion Correction?

Bunion correction is the surgical removal of a bunion, which is a deformity that causes the big toe to turn outward and a bony growth to develop at the base of the toe. During the procedure, the deformed joint and bones are repaired, which sometimes consists of removal.

Bunion correction is utilized when non-surgical approaches to treating the bunion have failed, or if the bunion is causing extreme pain that hinders regular activities such as walking.

Non-Surgical or Other Surgical Alternatives to Bunion Correction:

Bunion correction can be performed under local or general anesthesia.

Complications of bunion correction can include bleeding, infection and a negative reaction to the anesthesia that is used.

The prognosis for a positive end result for patients undergoing bunion correction is good.

Recovering from bunion correction takes six to eight weeks of wound care and bracing. Swelling can occur for up to six months following the procedure.